The history of the Apache Indians had over 250 years of war with the Spaniards on their Indian territory. Despite their best efforts, the Apaches tribes never settled the matter of strongly establishing their domain of their lands with the Spaniards.

Early History of the Apache Indians…

The Apaches first experienced Europeans in 1541. The Spaniards were known for their horrendous tortures and mutilation of the human body that inflicted onto the various Apache tribes. These Spaniards under the guide of Francisco Vazquez de Coronado, noted the Apache people would travel the plains with the cows (buffalo) and lived in tents like Arabs. Apaches’ history shows they were, in fact, nomads from history past. They hunted by foot until the Spaniards established horses (along with sheep and goats) in Apache lands in 1598. The Spanish horse bred in Spain was the Moorish horse which was well suited for the dry country of the southwest.

Middle History of the Apache Indians…

Initially neighboring tribes ate horses when given opportunity but they soon saw the animal’s benefits. By 1680 through various circumstances the Spanish haciendas were abandoned allowing the Apaches and surrounding tribes to establish their own herds of horses. Despite the horses taken, many of the Spanish horses were left to become wild and roam the plains with the buffalo. The Spaniards called these wild horses mestenyeno which translated to be ‘wild’ and the derivative of our name for wild horses ‘mustang.’

From working with these horses the Apaches, and later other nations of the plains, highly trained the animals. It was the plains natives Indians, in the wide open grasslands, that became the masters of these wild horses . They became so skilled at their horsemanship that they could guide their horses by the press of their knees and a single rope of horsehair as a bridle all the while slipping down the side of the horses to shoot their arrows. Their stunt riding was affected for securing their key diet of buffalo. (The skins were the Apache’s clothes and tepee shelters.)

History of the Apache Indian Health…

Among the interesting history of the Apaches was an article on Indian vibrant health that they sustained in the arid environment. Among all the Turtle Island Indians, the Apache surrounding native Indians sustained their high index of native health into the 1800’s. With little agriculture, and a majority of wild meat and other foods, the Apache Indians maintained outstanding nutrition and thus vibrant sustaining health.

Later History of the Apache Indians…

By the mid 1850’s the United States government directed the Mescalero Apaches and their cousins, the Navajos, were to relocate to Bosque Redondo which was a 40 square mile reservation in U.S. territory of New Mexico. Only after U.S. military under Kit Carson’s command burned the Mescalero Apaches’ homes and destroyed their crops did the 8,500 Apaches and Navajos relocate. In the Spring of the year, 1864, became history for the Apache Indians according to U.S. government. As if prisoner of war, they were required to stay within the boundaries set and try to survive on government rations which were not sufficient. So, the American government required the native people to set up farms on the reservation to assist themselves. With it being poor soil there would be only one outcome: poor crops.And the result? The vibrant health that they had sustained for thousands of years in a desert setting, were drawing to a close. The very life was being drawn out of them.

Names Among the Apache Indians…

The Apaches numbered about 6,000 among several native tribal bands. In 1860, Mangas Coronado/Coronadas (aka Dasoda-hae translated Red Sleeves,1793?-1863), then in his 60’s, signed a treaty of peace with the United States government, but 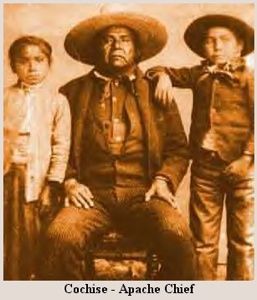 as with the vast majority of the treaties between American government and indigenous people of Turtle Island, it came to naught. Other leaders during this time period among the Apaches were Victorio, and Naiche along with Geronimo.

Geronimo, a Chircahua Apache leader by this time made a serious attempt at keeping at least some of the Apaches still free in their nomad lifestyle. It was a 5 year struggle, but eventually with their sophisticated guns and canons, the United States army took possession of the Apache’s of the Plains. The 1880 public statement was made that the ‘Indian’ must be informed that they can no longer stand against the constant tide of civilization…

History of the Apache Indians Today

By 1940 only 35 Apaches Indians were recorded in Oklahoma. By 1970 they were making a comeback with 1,500 and were documented in New Mexico. The history of the Apaches

Apache populations today may be found in Oklahoma, Arizona, and New Mexico.Today, there are seven Native Apache Nations’ reservations with a total of over 55,320

Mescalero Apache Tribe: 3000 members with about half speaking their native Apache tongue

Despite the American Indian history of the Apaches, they resiliently live on!

“The Backbone of our History”